Breaking In The New Year

Check out some student articles by clicking here!

Two introductory lessons and an
Official Moo Sul Kwan Uniform
for only $20!

I woke up on a Saturday morning with a stark, sudden fear that I had overslept in my gut. Lucky for me though it was only 5 AM and my alarm wasn’t even set until 8 AM. Of course, after that I found myself staring at the ceiling imagining what the day was going to produce. Mostly I found myself contemplating why on earth, as a fully grow adult women I had let myself be talked into jumping around and yelling in front of hundreds of strangers.  I hadn’t been this nervous since my first day in class 6 months ago. As my thoughts went down that unpleasant rabbit hole, I felt the all too familiar self-consciousness creeping back in the form of nerves and fear.   Granted it was a meek fear, a gentle one, this fear was timid but nevertheless it still had a voice. For a moment I considered giving into it, all the slippery excuses that could miraculously pop up to keep me from going to the competition flashed though my head. Back when I first started going to Taekwondo it was a bit of a joke. My family and friends would still chuckle when I bring it up; saying things like, “You are really still doing that?”. I was just trying to be healthy, and they respected that, but didn’t understand why Taekwondo.  In the beginning, the excuses to skip class, or to only put 1/2 effort into class came easy, but as time has gone on I have realized that I like the version of me who DOES show up and DOES try my best so much more. Maybe there is some good that my parents embedded deep in my subconscious after all. It manifesting itself now in the form of thoughts I hear in my mother and fathers singsong voices; “ If you pay attention and try your best you’ll do great sweet heart”, “You don’t want to be a quitter, Do you?”, “You won’t know what you can accomplish unless you show up honey”.   Sighing deeply, I shook the excuses from my mind, and forgave myself for the moment of weakness.

As I walked into the tournament, kids and parents were in a frenzy around me. Surrounded by what felt like a horde of people that I had never met I stood in the middle of the rush trying to find my place.  The biggest thought in my mind was “What on earth am I doing here!?”.  Then I started to hear the muffled kihaps of the black belts on the far end of the complex, and across from them I spot the kids from our class, all grouped together watching the black belts with wide eyes,  each one with a  look of reverence upon their faces. I couldn’t help but smile. Finding my feet again I went to join them.

As they called us all up to be sorted, and we hastened to try to look unintimidated, the chaos became a little bit more clear. I was able to look in the faces of the people I would be competing against for the first time. They divided us into our smaller groups, and now standing with just 3 women who were all clearly new at this... a black belt leans in and said to my great surprise, “Are you nervous?”. My soon to be opponent said, “NO SIR!”, at the exact same moment I said, “Heck yes!” I was thinking to myself “What are you thinking! You don’t say that out loud!”, when to my great surprise  he simply smiled at both of us and said very kindly, “I have never been to one of these where I wasn’t nervous”, and looking at me he continued, “Never lose that! It is your edge” and he winked. I breathed a sigh of relief and smiled gratefully back.

Sitting amongst my team waiting for my name to be called, I tried to tell myself not to be nervous. Then I heard “Frankie Hurd, UP!” scrambling to my feet and straightening my uniform, I was so focused on get my belt straight I found myself making eye contact with my boyfriend in the stands as I bowed.  As this happened, I thought “That is weird, I’m not supposed to be facing this way”. Feeling the blood rush to my cheeks in embarrassment I quickly turned around and bowed again facing toward the judges this time.  As if I was hearing my instructors voice in my hear in my ear, I thought “Don’t let it show, just keep rolling”.  Nearing the end of my event my concentration dropped for a second and I let myself think “You go girl! I am doing so good! Best one yet!”, and in my moment of pride I lost track of where I was! Fading for a second before finding my place again I ended up kicking myself for losing focus. Amongst my inner monologue of “Get it together Frankie!”, I completely forgot my last move again!  I sat down, disappointed and embarrassed, but once again hearing my parents’ voices say, “That’s ok Frankie, you can always do better next time”.  Feeling that resolve swell up in me, I knew that I wouldn’t let myself dwell on the mistakes but push forward to the next thing.

Up next was the Team event. In my mind, this was the biggest piece of magic that happened that day. In that moment, buzzing with excitement my team of 6 oddities felt like we were on top of the world. Six months ago these people were strangers. The most unlikely group of friends you could mash together in southeast Missouri; two 16 YR old boys who otherwise would be way too cool to consider talking to us, a local football coach, the new kid in town with a martial arts past who rarely speaks,  and a couple of thrown together women in their 20s just trying to be healthy. We all have absolutely NOTHING in common, except the decision we all consistently make to come together 2 times a week to practice taekwondo. Against the odds, we seem to have fit together as an unlikely but solid team. Even though we all had our hopes up for the first-place spot we couldn’t be disappointed with receiving second once we had seen the fluidity and precision that the upper belt team competed with.

At the end of the day we came together as a proper family and celebrated. We were all tired from excitement but full of pride for what we had accomplished, not about the trophy’s or the wins, but about simply showing up and putting effort into a common goal. Even though it still feels silly to be a fully-grown adult kicking, punching, and yelling in front of strangers. I find myself letting the self-consciousness of it ebb away as I continue to do the simple act of showing up because it makes me feel happy / healthy and trying my best because it makes me feel proud.  Looking back, I can’t help but feel silly for how nervous I was leading up to it; I learned a little, I laughed a lot, but best of all I got to see my team grow and become more of a family.

Our passion, since 1969, has always been to develop students who learn and experience the many benefits of becoming a self-directed learner.   We believe that we can be the best at providing an education-based martial arts program that develops students into champions.

Our dynamic classes provide the best in martial arts lessons for toddlers, kids, teens and adults. Whether you are looking for karate for kids, adult self-defense classes, or anything in between, we'll have the program for you. 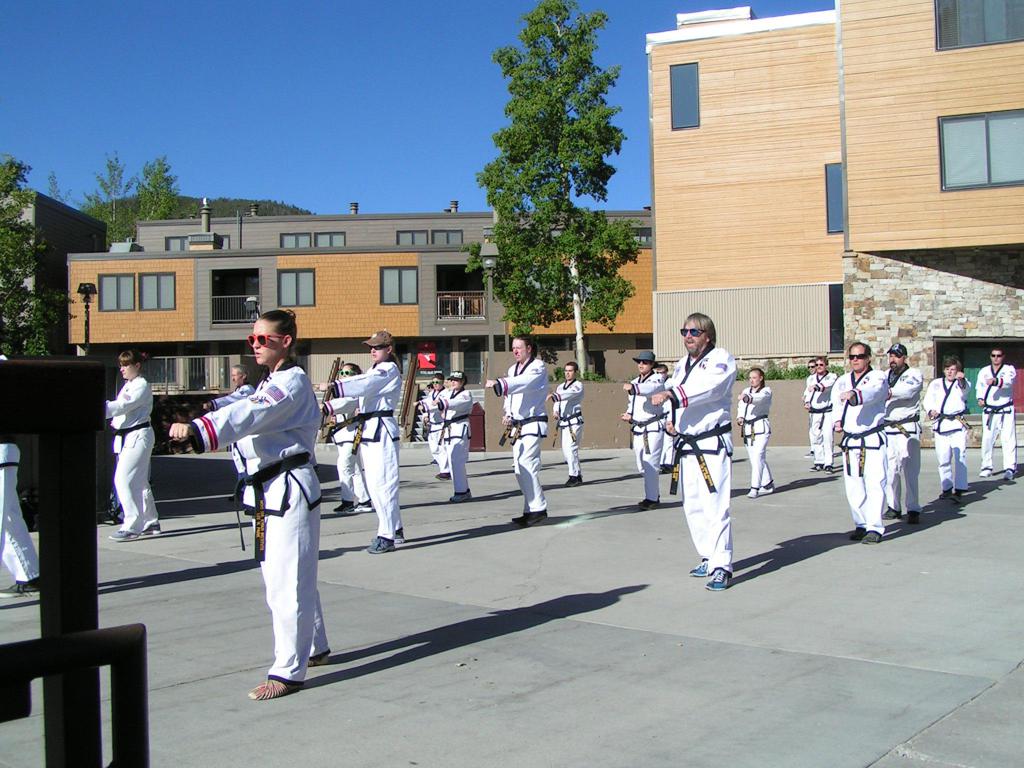 Having fun at our MSK Summer Expo!